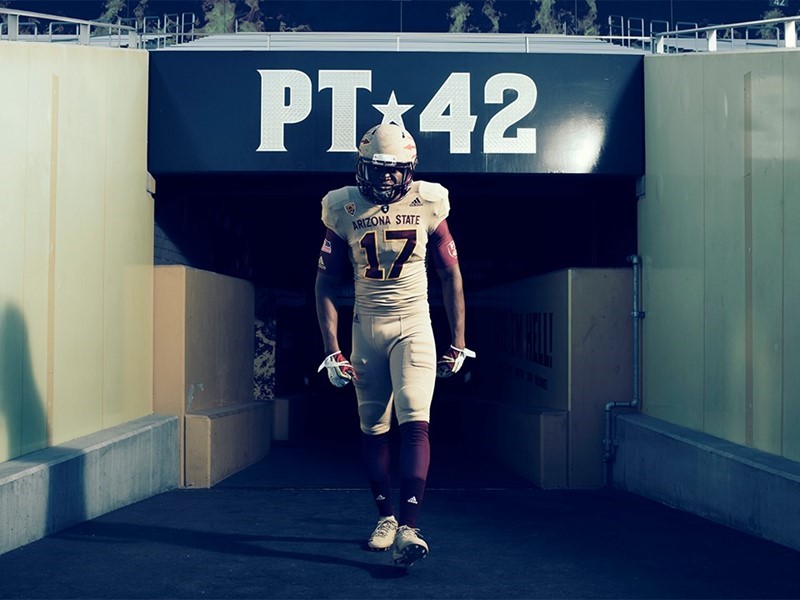 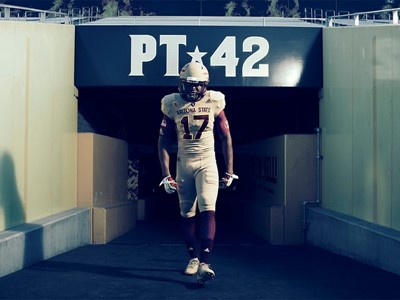 In 2002, Pat Tillman, an Arizona State University alumni and safety for the Arizona Cardinals, proudly put his professional football career on hold to enlist in the U.S. Army with his brother, Kevin. During his career at ASU, Tillman helped lead the team to the 1997 Rose Bowl after an undefeated season, earned three consecutive selections to the Pac-10 All-Academic Football Team, a first team Academic All-American honor, as well as the NCAA’s Post-Graduate Scholarship for academic and athletic excellence. In April 2004, Pat lost his life while serving with the 75th Ranger Regiment in eastern Afghanistan.

Inspired by Tillman’s legacy, the special edition “Brotherhood” uniforms are centered around the tan colors of Army fatigues and accented with the Sun Devils’ iconic maroon and gold colors. Building off the theme of previous uniforms, adidas designers worked in tandem with ASU to research the typography and sizes of the wordmark and numbers from the Tillman era in order to recreate the look that the 1996-1997 team wore during their Rose Bowl season.

Additional design details include the phrase “Give ‘em Hell,” a line from the ASU fight song which Pat famously uttered to his teammates prior to beating defending National Champion Nebraska 19-0 in 1996. The phrase is tonally knitted into the side of the jerseys using Primeknit technology and also located inside of neck liner for players to see as they don their jerseys and get ready to take the field. The nod to the military continues onto the TEHCFIT baselayer. Utilizing an overspray design found on military vehicles, equipment, etc., the PT-42 logo is prominently placed on the chest and left sleeve, while the U.S. flag is featured on the right sleeve.

Further paying homage to Tillman and the U.S. Military, a tan camouflage helmet is highlighted with the word “Brotherhood” on the back of the helmet. Underneath are the names of any ASU player or coach, past or present, who has served or is serving in the U.S. Military. Additionally, the PT-42 badge is highlighted directly above the Arizona State moniker at the crest of the jersey collar. To complete the theme, an overspray graphic of the PT-42 logo is featured on the inside of the adizero 5-Star cleats and adizero 5-Star gloves. The adizero cleats are the lightest cleats in the game and adizero gloves feature 4-way stretch mesh for compression fit and GripTack for consistent control in all weather conditions.

The special edition “Brotherhood” alternate uniforms are at the forefront of design and innovation, providing players theperfect blend of style and technology for elite performance. Made with a cutting-edge, proprietary yarn blend that increases durability and abrasion resistance, Primeknit is the premier compression uniform system, featuring the latest generation of adidas TECHFIT technology. Primeknit helps keep players cool and increases range of motion, giving athletes an unrivaled level of comfort and allowing them to perform at their highest levels. The jersey's padlock system secures tension over the shoulder pads, while the bodymap fit adheres to the player, making it difficult for opponents to grab, hold or tackle.
Created to honor Pat’s legacy of leadership and service, the Pat Tillman Foundation invests in military veterans and their spouses through academic scholarships–building a diverse community of leaders committed to service to others. The special edition “Brotherhood” retail product line will be available at university bookstores and www.adidas.com with a portion of the proceeds benefiting the Pat Tillman Foundation. 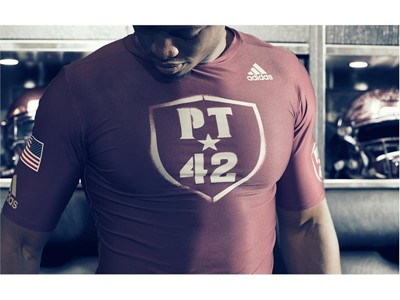 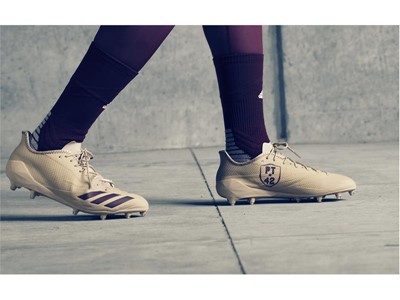 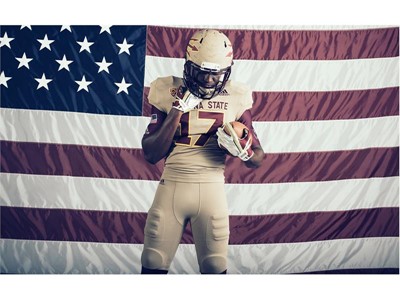 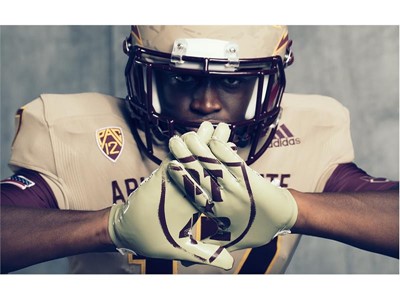 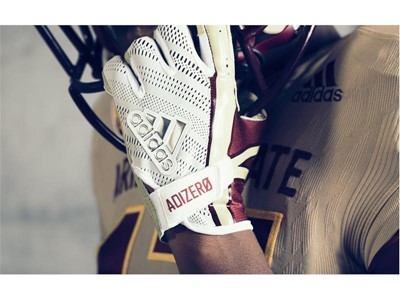