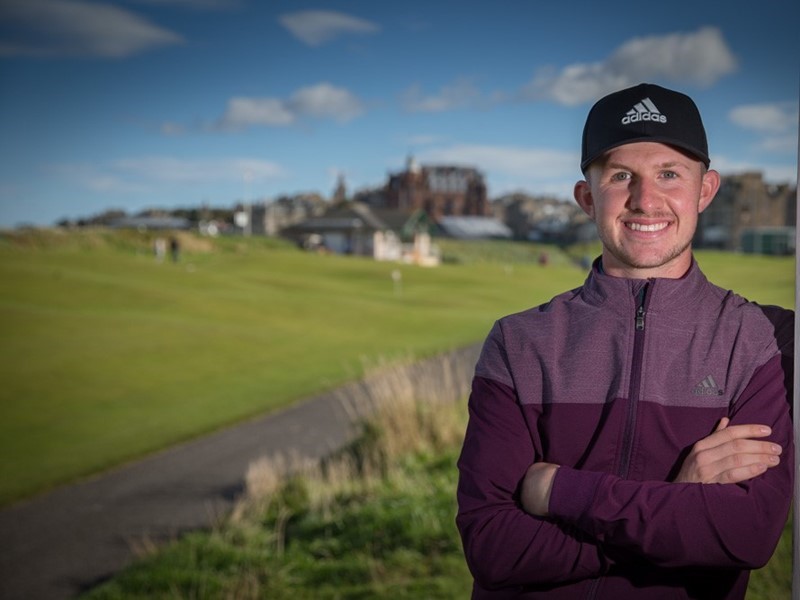 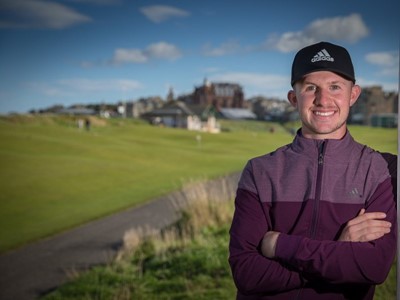 After turning professional in September 2017, Connor will wear adidas headwear, apparel and footwear
BASINGSTOKE, HANTS (4TH Oct, 2017) – adidas Golf, an industry leader in performance apparel and footwear, today announced the signing of Scottish golf professional Connor Syme. Connor’s deal will include adidas headwear, apparel and footwear and now becomes the newest member of the adidas Golf roster of athletes.
Connor has enjoyed a successful amateur career both as an individual and representing Scotland. He had a very strong amateur career including helping GB&I lift the Jacques Leglise Trophy in 2013. In addition to many team successes, Connor reached the semi-finals of The Amateur Championship in 2014, won the Australian Amateur Championship in 2016, and reached the quarter finals of The US Amateur in 2017. He also qualified to play in The Open Championship in 2017 and rounded off a great amateur record by being selected for the 46th Walker Cup matches where he put in a stellar performance against the U.S. team. He finished his amateur career in the top 10 in the world rankings.
I am absolutely honored to be joining the adidas family. I've loved the brand all my life and was proud to wear the 3-Stripes whilst playing for Scottish Golf. The plans adidas Golf has for the brand in this new chapter is very exciting and I can't wait to wear the new TOUR360 shoe I've heard so much about.
- Connor Syme
Connor was awarded Scottish Amateur Golfer of the Year for 2017 and began his professional career in great style by finishing tied for 12th at The Portugal Masters in September, one of the best debut performances in recent years on The European Tour. Connor tees up this week at The Alfred Dunhill Links Championship.
Connor has a bright future ahead of him following what has undoubtedly been a remarkable amateur career. He makes a great addition to our already stellar roster of athletes and we're excited to work together as his career unfolds.
- Tim McNulty, global sports marketing director, adidas Golf
This signing sees Connor join an already impressive stable of professionals including world No. 1 Dustin Johnson, reigning Masters Champion Sergio Garcia, Justin Rose, Jon Rahm and 2017 PGA TOUR Rookie of the Year Xander Schauffele.